When Sex Is a Weighty Matter

It’s widely known being overweight can have serious health consequences. And in many cases, it can have deleterious effects on a guy’s sex life. According to the CDC, one third of all Americans are obese. That is a lot of Americans.

Simply with increased age alone, there is an associated natural decline in erectile function. If there are other diseases present, there is a greater risk. E.D. and sexual performance are great sources of anxiety and concern for all men. Poorly perceived performance leads to worsening performance and depression for even the most confident of men! Obesity can bring on these diseases and also magnify these psychological concerns.”*

When Sex Becomes A Belly Flop 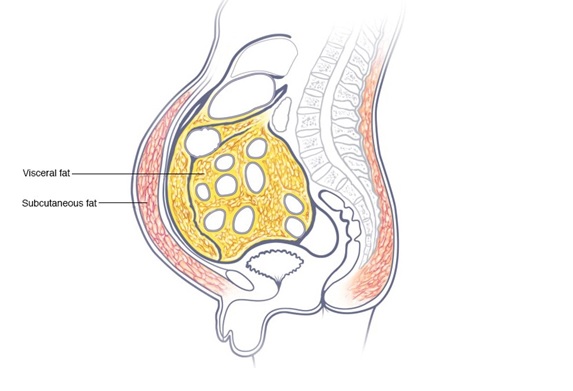 Belly fat is nothing to joke about. Find out what causes belly fat, the health risks it poses for men and what you can do to lose the extra pounds.

If you’re carrying a few extra pounds, you’re not alone. But this is one case where following the crowd isn’t a good idea. Carrying extra weight — especially belly fat — can be risky.

Belly fat is a more dangerous fat. The trouble with belly fat is that it’s not limited to the extra layer of padding located just below the skin (subcutaneous fat). It also includes visceral fat — which lies deep inside your abdomen, surrounding your internal organs. Regardless of your overall weight, having a large amount of belly fat increases your risk of:

Age and genetics may contribute to gaining belly fat. Your weight is largely determined by three main factors:

A Measured Approach To A Better Sex Life.

“If you eat too much and exercise too little, you’re likely to pack on excess pounds, including belly fat.

Getting older plays a role too. As you age, you lose muscle — especially if you’re not physically active. Loss of muscle mass decreases how quickly your body uses calories, which can make it more challenging to maintain a healthy weight. According to the 2015-2020 Dietary Guidelines for Americans, men in their 50s need about 200 fewer calories daily than they do in their 30s due to this muscle loss.

Your genes also can contribute to your chances of being overweight or obese, as well as play a role in where you store fat. However, balancing the calories you consume with activity can help prevent weight gain, despite your age and genetics.

Alcohol’s calories contribute to beer belly. Drinking excess alcohol can give you a beer belly, but beer alone isn’t to blame. Drinking too much alcohol of any kind can increase belly fat, because alcohol contains calories. If you drink alcohol, do so only in moderation.

For men age 65 and younger, moderation means up to two drinks a day. For men older than age 65, it means up to one drink a day. The less you drink, the fewer calories you’ll consume and the less likely you’ll be to gain belly fat.” **

It is proposed that the increased state of inflammation may cause free radicals in the body that cause oxidative damage to tissues. The harmful effects of hypertension, diabetes and hyperlipidemia are well studied, published and accepted.

It is well studied and accepted that obesity often leads to diabetes as well as atherosclerosis-related hypertension and cardiovascular disease, which can cause E.D. We do not know exactly why, but obesity appears to damage the inner lining of the vessels (the endothelium) and when this lining is damaged the penis cannot get enough blood flow to produce and sustain an erection.

‘An erection is basically a cardiovascular event, and if blood flow cannot increase because the blood vessels can’t dilate normally, then there is a decrease in erectile function,’ says Robert A Kloner, MD, a cardiologist and professor of medicine at the University of Southern California’s Keck School of Medicine. A fatty diet and lack of exercise that contribute to obesity and cardiovascular disease can cause narrowing and hardening of the arteries (atherosclerosis), which can slow blood flow as well.” *

E.D. has many causes. Some genetic. Some age-related. Those that are  self-induced, such as obesity can be solved in numerous ways.

About 90% of cases of ED are caused by physical factors, classified as vascular (related to blood flow) and non-vascular diseases. It is estimated that 70% of all ED cases may be attributable to vascular diseases alone.

ED is more than just a sexual problem. A fulfilling sex life can lead to a greater sense of self-esteem and confidence.